Volunteering Brings Joy to All!

Editor’s Note: Caroline Russell is a 7th-grade student in the Panther Gifted Academy at Sarasota Middle School who volunteered with the Suncoast Campaign for Grade-Level Reading during the Sarasota Holiday Parade.

Earlier this year, I was inducted into the National Junior Honor Society and committed to serving my community. Like most teenagers these days, I have lots going on, so it seemed like it would be hard to fit in volunteer opportunities. 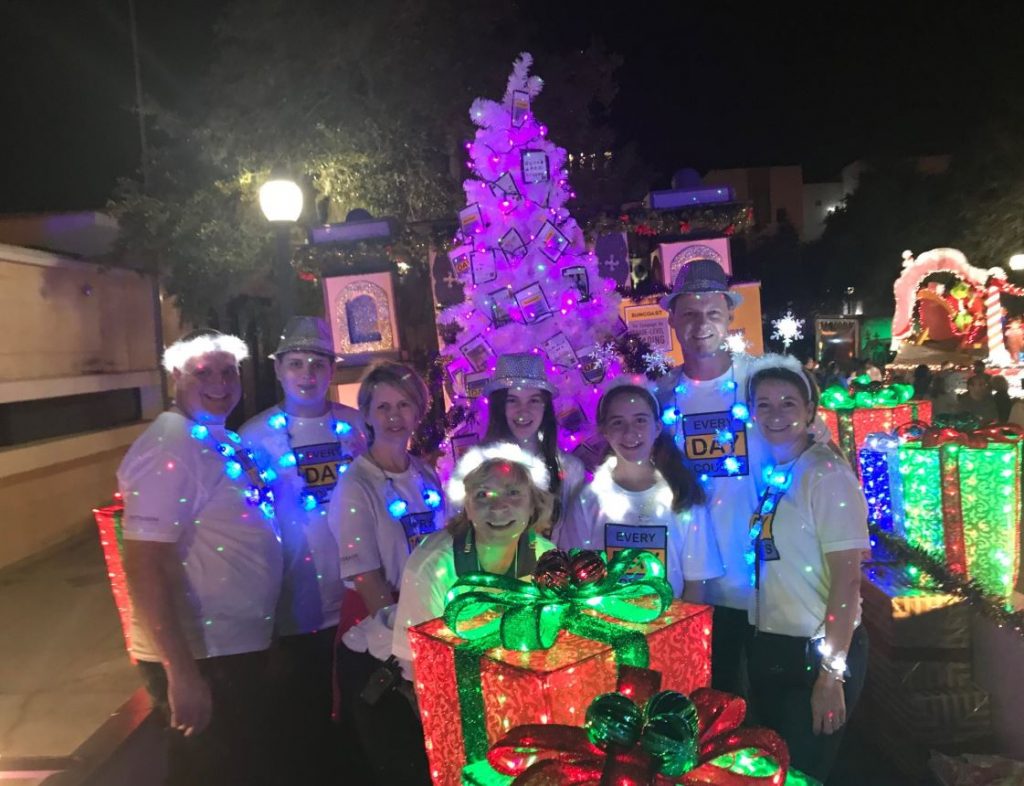 My mom found out about a volunteer opportunity that involved bringing a project to our house. I asked if I could have a friend over to help, and together we made ornaments for The Suncoast Campaign for Grade-Level Reading’s (SCGLR) float in the Sarasota Holiday Parade.

Glitter was involved (and it’s still all over the house). We laughed a lot while we made ornaments and hot glue and glitter everywhere. If asked to rate the project, I would give it a 7 out of 10. We had fun, but it was a little tedious making ornament after ornament.

We also volunteered to help with the actual parade. The Saturday of the parade was a busy day for me. A flute lesson, followed by a Rise Above Performing Arts workshop, and then attending a Family Day performance of The Music Man at The Asolo. As we headed to Main Street to help prepare the 450+ kids and families who were going to walk with the SCGLR float, I wasn’t sure what to expect.

We saw the purple SCGLR tent as we approached the staging area. The SCGLR engagement team showed us what we would be doing; lots of checking batteries, and turning on the light-up props the parade participants would carry during the nighttime. At first, it seemed slow, but then, people started to trickle in. Before we knew it, there were hundreds of people checking in, and we stayed busy helping each of them pick their two blinking items.

It was magical watching the smiles and excitement of kids and their parents as they saw the array of items to choose from — sparkling hats, wands, blinking bracelets, snowflake necklaces, and more. I learned that many kids and adults dream of being of being in a parade, and it felt really good to help that dream become a reality for many Sarasota students and their families.

Then, we found out our family was selected to be with the float. Wow! I didn’t know what that would be like, but it sounded exciting. It was a little sad to leave the excitement of the staging area, but a new kind of excitement arose as we started walking by floats full of people with music and songs filling the air.

When we got to the SCGLR float, I noticed the big tree in the middle full of the decorations that my friend and I helped create. It was cool to see our hard work on display. We learned that my friend Ava and I would get to walk alongside the float and pass out colored bracelets with the phrase, “Reading is the key to Succeeding.”

When the float started moving, we ran to keep up with it. People lining the streets cheered us on and clapped. As we approached the official starting point of the parade, we slowed down so the hundreds of Suncoast Campaign for Grade-Leveling Reading walkers could join us. It was quite a sight to see everyone with their flashing lights waiting for the float. I wish I could have seen what we looked like. A sea of blinking lights is what I imagined. We were all singing about attendance and telling everyone who got a bracelet to Read! Read! Read! Never have I seen and heard people get so excited about colorful rubber bracelets, attending school, summer learning, and reading. It was AMAZING!

And then, suddenly, we stopped. What happened? Where were all the people? The crowds were still cheering, but we had finished the route. As we turned off Main Street, my heart sank. Was it really over? The last 2 1/2 hours flew by. Ava and I commented on how much fun it was to help people. I have a new energized outlook on community service. Maybe you should give it a try! Next up for me? Filling Christmas baskets for the Tiny Hands Foundation on December 22nd. Hope to see you there!