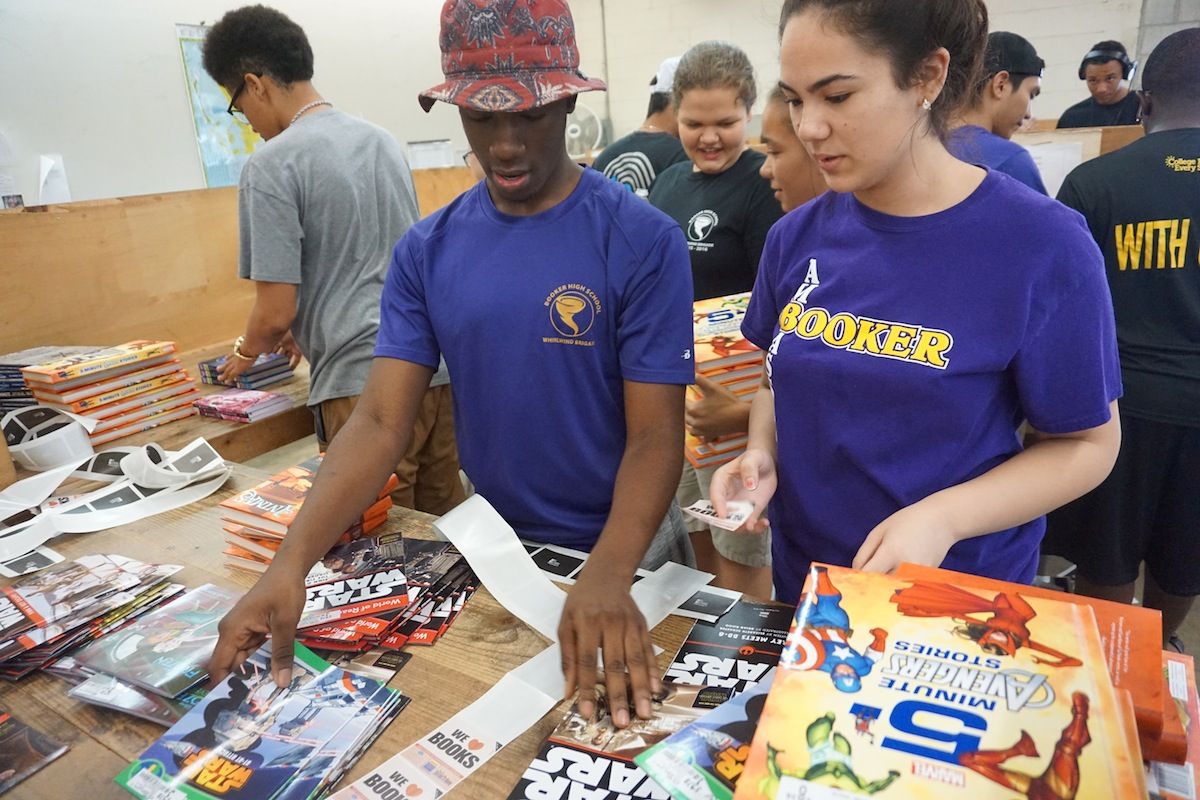 Thousands of Books, Countless Opportunities to Encourage a Love for Reading This Summer

Forty-two thousand books, and the task to sort them for deserving kids. That’s what June 8 meant to me.

Purchased through the Community Foundation of Sarasota County, I initially thought of all the complications and possibilities of paper cuts that could result from this Mount Everest-sized expedition of literacy organization. However, this book-sorting extravaganza was benefiting the Suncoast Campaign for Grade-Level Reading, which focuses on helping all students read on grade-level by the end of third grade — a worthy community effort.

From my time working at the Boys & Girls Clubs of Northwest Georgia, I understood the difficulty of ensuring that students from impoverished areas learn to read proficiently. It’s something that mirrors what’s going on throughout the country: about 67 percent of children nationwide and more than 80 percent of those from low-income families are not proficient readers by the end of third grade.

Based on my experience, I was motivated to do my part. The books, which will be donated to local children on National Summer Learning Day — July 14 — will encourage students and families to continue educational progress over the summer months when school isn’t in session.

Upon my arrival, I was welcomed by Booker High School band members who had already been volunteering for a couple hours. In an assembly line, they applied Suncoast Campaign for Grade-Level Reading stickers inside the book covers before passing them on to the next student who would sort the books by title. From Star Wars and Frozen to Mickey Mouse and others, I began to feel the same sense of excitement that I imagine the children will feel when they receive these books — for free.

At first, I took pictures of the event to ensure the hectic and fast-paced moments didn’t escape documentation. These pictures show something that people nowadays believe is unusual — teenagers enjoying volunteer work. The smiles on the faces of these student volunteers demonstrate that. They appreciate the opportunity to make a difference. They appreciate the chance to give back to the educational community that taught them how to read.

At the end of the day, thousands of books were organized by grade level and are ready to be delivered to elementary schools like Alta Vista, Tuttle, Gocio, and Emma E. Booker. Getting these books into homes that may not have any other books is vital to encourage continued development during the summer months.

Illiteracy is an issue that is global and prevalent in every country — no matter how developed. It is an issue that needs the attention of entire communities and relies on the teachers, volunteers, policy makers, donors and parents who help create change everyday. These 42,000 books were a great contribution, and a sign that people are working to change the landscape of our future. This day reminds me of one of my favorite stories, which, fittingly, was first introduced to me on a poster in my middle school language arts class:

Once upon a time, there was an old man who used to go to the ocean to do his writing. He had a habit of walking on the beach every morning before he began his work. Early one morning, he was walking along the shore after a big storm had passed and found the vast beach littered with starfish as far as the eye could see, stretching in both directions.

Off in the distance, the old man noticed a small boy approaching. As the boy walked, he paused every so often and as he grew closer, the man could see that he was occasionally bending down to pick up an object and throw it into the sea.

The boy came closer still and the man called out, “Good morning! May I ask what it is that you are doing?”

The young boy paused, looked up, and replied “Throwing starfish into the ocean. The tide has washed them up onto the beach and they can’t return to the sea by themselves,” the youth replied. “When the sun gets high, they will die, unless I throw them back into the water.”

The old man replied, “But there must be tens of thousands of starfish on this beach. I’m afraid you won’t really be able to make much of a difference.”

The boy bent down, picked up yet another starfish and threw it as far as he could into the ocean. Then he turned, smiled and said, “It made a difference to that one.”