The Happiest Laundromat in the World!

When I first told a good friend that I’d be at the “Pop Up Neighbor Through Laundry” event at the SuperMatt in Port Charlotte, FL, she practically glowed. “That’s my favorite event of the year,” she said. Her favorite event? Pop Up Neighbor Through Laundry events, created in partnership by the Suncoast Campaign for Grade Level-Reading (SCGLR) and the Laundry Project, provides a way for the SCGLR to connect directly with the community. Working alongside the United Way of Charlotte County, with The Patterson Foundation underwriting the costs of the three-hour event, the plan was to pay the laundry fees for anyone who came through the door. Now, I thought the idea of giving away free laundry to the people of Charlotte County sounded like an amazing way to connect with the community and share the important work of SCGLR, but… her favorite event? At a laundromat?

Having recently moved from a New York City apartment with few modern amenities, I am no stranger to laundromats. But I generally think of laundromats as dreary places filled with people who would rather be anywhere else, doing anything but laundry. Well, that was definitely not the case when I arrived at the SuperMatt.

It was a drizzly overcast morning when I pulled into the parking lot early on Saturday, but the laundromat was already buzzing with excitement. Smiling volunteers were setting up an inviting reading area for kids to be read to by celebrity readers. A bookshelf and tables were stocked with all sorts of fantastic books for the kids to take home. There was an impressive buffet of donuts, coffee, chips, and sandwiches from Dunkin Donuts and Jason’s Deli (I’m happy to report the ham and cheese on croissant was particularly delicious). We put up signage around the room with laundry detergent, stain removers, bleach, and fabric softeners of every brand imaginable. When The Patterson Foundation says laundry is free, they mean free. No one would have to pay a dime to get as much laundry done as they wished. 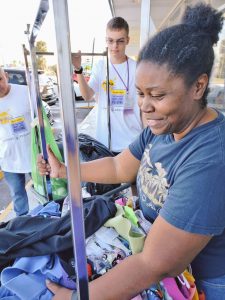 As if on cue, the sun broke through the clouds just as the event began. The people of Charlotte County started rolling in with loads (and I mean loads!) of laundry. When they heard the volunteers announce that it was free laundry day, patrons were skeptical at first. But when we walked them to the machines explaining that there were no strings attached, their skepticism melted into appreciation, and in some cases, relief.

I was lucky to be tasked with holding one of the laundry cards, so I got a chance to chat with customers as I swiped their payments. I was struck by what a financial burden laundry could be. One woman teared up as I swiped her final load of laundry. She planned on spending at least $60 cleaning her family’s clothes and didn’t know how she was going to pay for next week’s groceries, but now that stress was gone. The more I swiped, the more I heard how this relatively small gesture of kindness would make a big impact on peoples’ lives. One man was excited that he could use the savings to take his wife out to dinner for their anniversary. Another wanted to know how he could get involved with The Patterson Foundation so he could be a part of spreading this kind of joy.

Though it looked and smelled like every other laundromat in the world, the contagious generosity that filled the SuperMatt was unique. And I witnessed something I’d never seen at a laundromat before, people helping each other, sharing their stories, and learning about the importance of reading for young children. Patrons of all ages assisted in unloading dryers and delivering clean laundry out to cars. People were chatting, eating sandwiches, perusing books, and surpassing all of my laundromat expectations.

Experiencing the generosity of SCGLR and The Patterson Foundation firsthand was a truly moving experience. It gave me a new level of hope and connection that can be hard to find in today’s modern world.

As the final loads of laundry were finishing up (we helped 33 families clean 287 loads of laundry!), I understood why my friend said this was her favorite event of the year. Because this past Saturday, the SuperMatt was the happiest laundromat in the world, and nothing smells as good as fresh laundry with a splash of kindness.