Mind in the Making: Facing Challenges

I presented the Mind in the Making (MITM) workshop for parents at Iglesia Palabra de Fe. This group of professionals made up of married couples and single mothers were from different regions of Mexico, Colombia, Dominican Republic, Guatemala, and Puerto Rico. The participants had children ranging from ages one–adulthood, and were all eager to learn. From the first day, they had big expectations and really enjoyed every module that was presented. 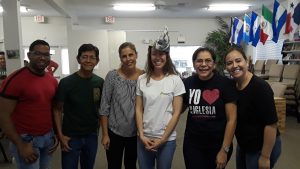 When the topic of connections was brought up, many of them started saying that it brought back memories. One participant said it reminded her of the time she spent in Colombia, especially when they were talking about coffee, because she grew up in a “hacienda” were coffee was harvested and made; another said that the module about challenges opened their eyes to see that they must reach higher and not be afraid due to stress or fear; and one of the single mothers said the MITM workshop showed her the importance of spending more time with her children. Many concluded that games help the children connect with them as parents and at the same time put in practice the executive functions.

After the first day in which we spoke about the introduction and self-control and focus, one father went to the store and bought several board games to play with his children. At the end of the course, he sent us a picture of his children playing with Connect Four. All the parents were happy and decided to put in practice everything that they had learned. This group of professionals realized that life is not all about work, and much of their success was due to what they had learned playing when they were kids.

As a facilitator, I am happy I could impact the lives of these people. That these families will be using the executive functions, and as a result, the quality of life of the parents and the children will improve because now they have the tools to become successful in their lives and face the challenges in this fast world that we live in. It was satisfying to hear them say that they will be more involved in the learning process of their children and practice everything that they’ve learned.