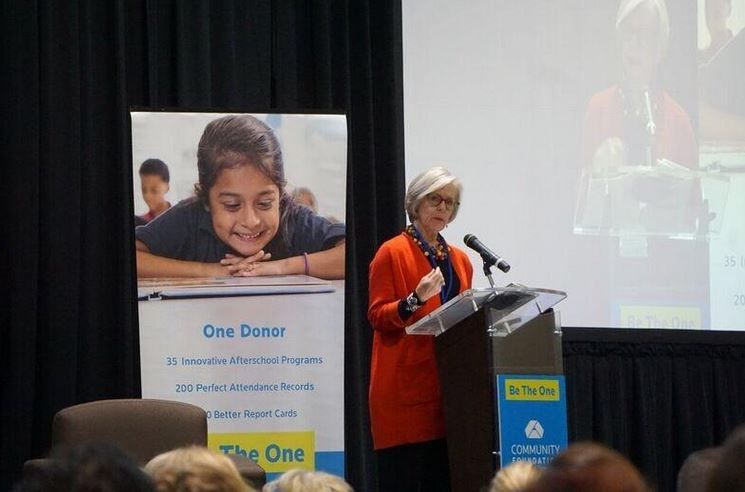 In ‘Two-Gen’ Approach, a Path to Student — and Parental — Success

Editor’s Note: This article was written by Ryan McKinnon, correspondent for the Herald-Tribune, and was originally published on March 13, 2018.

The Community Foundation of Sarasota County recently hosted a conference that focused on how nonprofits and educators can increase their effectiveness by extending their services to parents.

SARASOTA — Frankie and Lena Clark have a true war-love story. The couple met in Iraq — Frankie was a first sergeant and Lena a combat medic.

The romance led to marriage and three children. But their time in Iraq led to post-traumatic stress disorder for both of them, which Lena said can turn their functional home dysfunctional in an instant.

“Having PTSD is such a challenge for us,” Lena said Tuesday. “I have so many fears.”

When the Clarks’ two sons began attending Visible Men Academy, a Bradenton charter school, the couple joined a parenting group. There, they were surrounded by peers dealing with similar challenges and supported by school leaders.

The leadership of Visible Men is as intent on helping parents as it is on helping children, Lena said. Frankie said talking with other fathers has enhanced his relationship with his children. The support has helped them establish new routines in the home, and their sons are thriving.

The strategy Visible Men Academy has embraced is known as the “two-gen approach” — when educators and child advocates focus not just on the child but on the well-being of the parents as well, in the form of support groups, mentoring, educational and professional opportunities. The approach has been embraced by organizations nationally, and this week more than 230 leaders in education, philanthropy, and the nonprofit sector convened in Sarasota to discuss how kid-focused organizations can increase their effectiveness by extending their services to parents.

The Community Foundation of Sarasota County hosted the two-day summit, which concluded on March 13 at the Lee Wetherington Boys and Girls Club.

This story comes from a partnership between the Suncoast Campaign for Grade-Level Reading and the Herald-Tribune, funded by The Patterson Foundation, to cover school readiness, attendance, summer learning, healthy readers, and parent engagement. Read more stories at heraldtribune.com/gradelevelreading.

The Sarasota County School District has implemented two-gen programs at a handful of Title I elementary schools, where parents can receive workforce training, GED help, and attend English language classes.

At Alta Vista Elementary, Suncoast Technical College built nursing instructional facilities, so parents who want to earn their certified nurse’s assistant certificate can attend classes on the same campus as their children. Superintendent Todd Bowden said the district is intent on replicating that success.

“It’s all about scaling. We now know what works,” Bowden said. “People are coming to visit Alta Vista to see how it can be done.”

Bowden said the district had received a waiver from the state to stop charging tuition on those programs, and he said district leaders were anxiously watching a $500,000 allocation in the proposed state budget that would expand summer learning programs from four Title I schools to 11.

Raquel Hatter, the deputy director of human services for the Kresge Foundation, spoke during a morning panel discussion and said the first step for any organization is listening to the parents, they want to help.

“It’s not just inviting them somewhere. It’s engaging them and listening to them. What we know for sure is they know what doesn’t work,” Hatter said.

The biggest challenge of the two-gen approach is that it can require organizations to expand their scope beyond their level of expertise. Child care providers don’t have the same skill set as adult educators, so it is vital for organizations to partner to maximize their effectiveness, said John Annis, the Barancik Foundation’s senior vice president of collaboration and impact.

Those partnerships in Sarasota have flourished since the Community Foundation’s first summit on the two-gen approach two years ago. Kirsten Russell, the foundation’s director of community investment, said the best partnerships are informal, with a funder helping an organization fill the gaps in what they can provide.

The approach is integral to the Suncoast Campaign for Grade-Level Reading’s efforts as the organization works to help children read on grade level by third grade, said campaign director Beth Duda. Organizations that ignore a child’s home life will have difficulty attaining long-term success and generational change, she said.

“You can’t raise a kid to a level of success if you are not also raising the family and community at the same time,” Duda said. “It’s too easy for the child to fall back.”