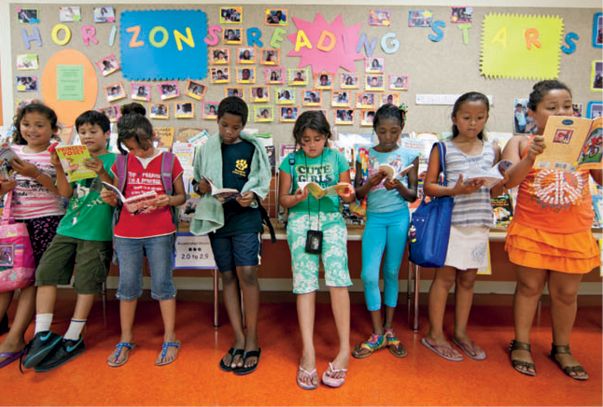 Nothing could stop Ralph Smith from getting to the Florida Philanthropic Network Summit in Orlando last month — not even 26 hours of flight delays and alternate travel plans when ice storms hit the South. That’s the passion he brings as the leader and managing director of the Campaign for Grade-Level Reading, a national collaborative movement of foundations, nonprofits, states and communities focused on the No.1 predictor of school success: third grade reading.

Smith, senior vice president at the Annie E. Casey Foundation, is a titan in the world of philanthropy. During a breakfast session hosted by The Patterson Foundation at the summit, funders from throughout Florida came to learn more about this national movement that impacts everything from national defense to ending inter-generational poverty.

The premise is this: reading proficiently by the end of third grade is the most important predictor of high school graduation and career success. But each year, more than 80-percent of low-income children miss this milestone.

The Campaign for Grade-Level Reading focuses on three key areas to move the needle:

School Readiness – As early as 18 months, low-income children begin to fall behind in vocabulary development and other skills critical for school success.

Chronic Absence – Starting in the early grades, the percentage of students missing 10 percent of the school year can reach remarkably high levels, and these early absences can rob students of the time they need to develop literacy skills.

Summer Learning – Research spanning 100 years has proven that students lose ground academically when they are out of school for the summer. The problem is particularly acute among low-income students who lose an average of more than two months in reading achievement in the summer, which slows their progress toward third grade reading proficiency.

Smith, who also spoke during the summit’s plenary, highlighted the following points about the campaign’s growth and the challenges of working collaboratively for systemic change — the only kind of change, he says, that will move our nation toward progress.

1) Growing a Movement – The campaign accelerated itself, scaling so quickly that the leadership team almost felt like it was getting run over by the stampede of enthusiasm.

2) Focus on High School Graduation – According to Smith, the inconvenient truth of our time is that many low-income children moving beyond third grade don’t and won’t make education a priority neither will many of their parents and caregivers. The path toward solving inter-generational poverty is educating children stuck in the cycle and ensuring they graduate from high school. Better graduation rates start with early childhood programs and creating a cultural shift valuing education.
3) Connecting Systems Creates Meaningful Change – There is great individual success among nonprofits working on early learning and other areas that relate to the campaign, but big progress will come from knitting everything together. Smith said it is akin to entering into a relay race but dropping the baton instead of passing it off. Many organizations are doing great work in their own spaces but low-income children will reap benefits through more coordinated efforts among programs. Smith suggested that systemic change will come from forming the scaffolding of support for a child as he or she ages and securing those points of intersection.
The Patterson Foundation aligns with this philosophy of  supporting points of intersection. Through its national work with the Campaign for Grade-Level Reading, The Patterson Foundation is supporting the role of an online community manager and enhancements to an online community platform where leaders in the 140+ communities can connect, learn from each other and advance the goals of the campaign.