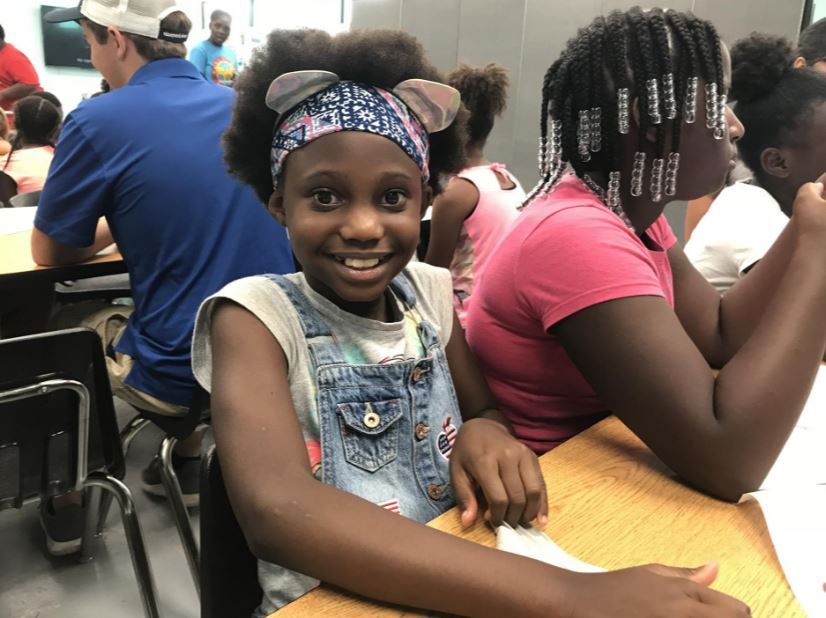 It has taken years of fundraising and planning, but the Arcadia Boys and Girls Club opened last week to a packed house of children.

ARCADIA — What was once an equipment shed in Arcadia has turned into the place to be for kids in DeSoto County.

It was a standard day for any Boys and Girls Club in America, and the same scene played out in communities across the country. But it was a new experience for the youngsters in Arcadia — a city with no YMCA, no public swimming pools, and limited after-school programs.

Summer camp was a foreign concept.

“These kids, they’ve never been in a summer program or an after-school program,” said Ashley Coone, a Boys and Girls Club consultant who has been the driving force behind the new club. “It’s all new to them.”

The branch opened on July 9, and it is being managed by the Boys and Girls Club of Sarasota. The small converted storage space is big enough for one large open classroom, where kids sit at low tables. The building is surrounded by public housing, the public housing is adjacent to Arcadia’s small downtown, and beyond that, it is mostly orange groves and cattle ranches for miles in every direction in DeSoto, Florida’s poorest county.

Those idle summer hours make it harder for DeSoto County Schools to maintain consistency on key literacy skills, especially among younger children. DeSoto’s third-grade reading test scores have dropped six percentage points since 2015, from 35 percent of third-graders reading on grade level to just 29 percent, the lowest rate in the state.

The new club is the result of a vision Coone had four years ago to restore the Smith Brown Recreation Center, an 8,800-square-foot gymnasium next to what is now the Arcadia Boys and Girls Club. The center was once a gathering spot for nightly basketball games, Christmas pageants, and parties, but it has been padlocked for years.

When Coone signed a $1 per year lease with the city to transform the gym in 2014, she didn’t know about the storage area behind it and didn’t have plans to renovate it. For four years she raised more than $150,000 locally through cake sales, barbecues and an annual fundraiser, with the goal of restoring the gym.

She managed to get state funding written into the budget twice, but it was vetoed both times. This year the state allocated $100,000 to the Smith Brown Project Initiative, a nonprofit Coone started to run the project. The money had to be spent within a year, but it wasn’t enough to finish the gym, so Coone started eyeing the storage space behind the gym.

The more she talked to the community, the more she realized that a gym alone wasn’t the solution.

“When we started it was all about a building. We had no plan of what are you opening the gym for, what are the kids gonna do,” Coone said. “We talked to the community, and they said they want resources for our kids. We want our kids to be able to read.”

The Smith Brown Initiative decided to put $200,000 toward converting the former equipment building into a large classroom to use for summer camps and after-school programs. It wasn’t an easy decision. The gym is an iconic structure to many who grew up in Arcadia, and the thought of it being filled once more is what had caused so many to give Coone donations.

“We just really thought people would be disappointed if we did this building and not the gym,” Coone said.

Fortunately, she was wrong.

On the first day of registration for the club’s summer program, Coone had anticipated maybe 30 kids showing up. But the camp was full within an hour and a half, with 75 kids signed up and another 25 on the waitlist.

“When we made our first couple visits we asked questions that would seem obvious for the community we live in,” said Boys and Girls Club of Sarasota CEO Bill Sadlo. “That’s when we realized there’s no YMCA, no parks and rec department offering after-school programs. We really realized this is critical.”

Jaliyah was skeptical when she initially heard about the club. She said the kids had been disappointed in the past when a rumored new swimming pool ended up just being a small splash pad.

“You can go home and get the hose and do that,” she said. “But this, this is different.”

She and her friend Chasity said they both played soccer for the first time last week. Jaliyah had never played pool or foosball before either. On Friday the girls sat with a handful of other students, working on vocabulary sheets. Their teacher had given them a list of 20 words. They were looking up the definitions on an iPhone and writing a sentence using the word.

They said they had never read books over the summer and there was “zero chance” they would work on vocabulary words if they were home by themselves.

The children are also participating in the Suncoast Campaign for Grade-Level Reading’s Suncoast Summer Book Challenge. Kids receive bracelets for every book they read, and several children in the room had wrists wrapped in the rubber bracelets. Chasity and Jaliyah and the kids surrounding them listed the books they had read over the last nine days — “Diary of a Wimpy Kid,” “A Wrinkle in Time,” “Harry Potter.”

Coone still has hopes of getting the gym converted, and now that she has the clout of the Boys and Girls Club behind her, she is confident it will get done.

“We are bringing people out here to see it, sharing about it. We are going to talk to the state again to try to get funding that way,” Coone said. “We don’t have that million-dollar donor right now, but we have a story and a need.”