A Simple Spark of an Idea Turned into a Parade of Lights!

SCGLR received a touching letter the day after the Suncoast Campaign for Grade-Level Reading participated in the 2018 Sarasota Holiday Parade:

“Ryan and I enjoyed walking in the parade so much! He is on the Autism Spectrum and was so, so nervous about doing it. He was worried about feeling silly or people looking at him. That lasted about 2 minutes once we started! You would have thought he was the mayor or something. He was waving, shaking hands, giving high fives! He gave one of his glow sticks to a child who was cheering and said to me, ‘Mom, did you see how big he smiled when I gave it to him?’

Thank you for inviting him to be a part of this year’s events. He said it was the 2nd best day of his life. The first was when he got Student of the Month! 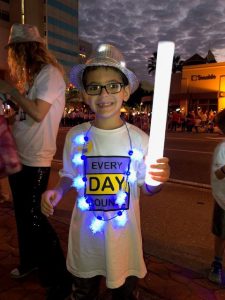 Ryan and his mother are two of the 417 people who joined the Suncoast Campaign for Grade-Level Reading in Sarasota’s Holiday Parade.  When we first learned that the Suncoast Campaign for Grade-Level Reading (SCGLR) was going to have a float in the 2018 Sarasota Holiday Parade, we used our Catalytic Thinking training to ask the question, “Who else cares about this, and what can we accomplish together that we can’t accomplish on our own?”  The SCGLR Engagement Team quickly assembled a list of people we hoped would be interested in walking with the float as it made its way down Main Street. We hoped we would attract 100–150 individuals connected to our mission to join us. To our great surprise, we received more than 480 parade registrations. Participants drove more than 35 miles to walk with us and show their support of the Suncoast Campaign for Grade-Level Reading.

The parade day excitement started at 9:00 am with many families coming to the North Sarasota Library to pick up their special parade T-shirts provided by The Patterson Foundation. Their excitement was visible. It was a clear indication of how proud they were to be a part of this grade-level reading movement.

SCGLR made quite an impression as people from the following groups assembled for the parade and donned their flashing, blinking parade accessories.

Once the parade started, the mile-long route seemed to pass by in a blink. As SCGLR participants finished the parade and started to disseminate into the crowd, parade spectators engaged in conversations with members of the SCGLR group. We overheard children sharing the importance of reading and attending school every day. The flashing, blinking lights worn by the SCGLR walkers seemed to seep into the crowd just like the importance of reading on grade-level is starting to spread into SCGLR’s four-county region – Sarasota, Manatee, Charlotte, and DeSoto counties.