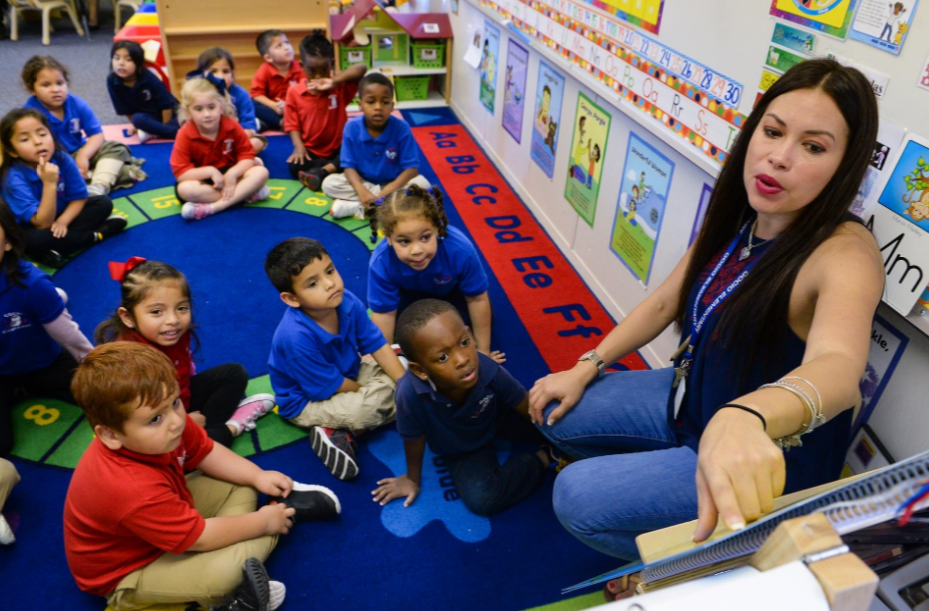 A group of 4-year-olds at Gocio Elementary listened intently as their teacher prepared to distribute scissors.

“When I give you these scissors, do we grab our friend’s hair and cut it?” Jackie Ngo, a paraprofessional at Gocio, asked the group. “Noooo,” the children dutifully replied.

As Ngo reviewed scissor safety rules with her group, small clusters of children around the room were at work — gluing macaroni to construction paper, practicing letter recognition on computers, or listening to a story about a mother bird building a nest.

Months ago, most of the kids didn’t know their ABC’s or how to function as a member of a classroom; now, they are working independently and getting ready for the next big milestone in their young lives: kindergarten.

Gocio Elementary’s pre-kindergarten program is unique in Sarasota. The students — all of them 4 or 5 years old — learn the daily school routine. They ride a bus to school, eat in the cafeteria, check out books from the library and are taught by certified teachers and paraprofessionals — all for free.

It’s a remarkably good deal in an era when the rising cost of child care means even the cheapest providers cost families thousands annually and research is increasingly showing that the more prepared a child is for kindergarten, the more likely they are to perform on grade level years later.

The 36 children participating in this year’s cohort are the beneficiaries of Sarasota philanthropists Joe and Mary Kay Henson, who hope their seed money will be so effective that the school district will have a “moral obligation” to take over funding and implement similar programs on a wider scale.

“Our approach is that philanthropy, whether it is foundations or individuals, doesn’t exist in perpetuity,” Joe Henson said. “So what we do is pilot programs that the school district couldn’t afford to do in order to prove that some things work.”

Learning how to do school

The Hensons donated $700,000 for a three-year pilot that will likely serve roughly 90 children. At that rate, the cost is $7,777 per child, per year, which is in the ballpark of what some parents end up paying for preschool. The only requirement is that the child is zoned to attend Gocio or have a sibling attending the school, and the school accepts children on a first-come, first-served basis.

The program is in year two of the three-year pilot, and Gocio principal Steve Royce said the community is catching on to the idea. He said he had a mother approach him recently about getting her 1-year-old onto the waitlist.

Royce said next year when the pilot expires, he expects to have both anecdotal evidence and data showing that the program was effective.

“They are able to be treated as a student, and it helps with that transition,” Royce said. “Transitions are hard for kids, so when you come to a new place regardless of age it’s always a little bit nerve-racking, especially when you are 4 and for the first time going to this place called school.”

Andrea Castano, a pre-k teacher at Gocio, said her goal is for children in her class to leave knowing upper- and lower-case letters of the alphabet, how to count to 30 and to have the social and emotional maturity to handle kindergarten.

“I teach them how to take care of themselves in the classroom,” she said. “They clean up their mess, stack chairs, put their toys away. If they have a problem with a friend, I tell them to talk to them before they come talk to me.”

At the beginning of a school day last week Castano stood in front of the 4- and 5-year-olds and asked the children to make a group decision: Did they want to start the day by singing “Who Let the Letters Out?” or by playing a game called “Phonecize”?

Castano told the children to stand up if they wanted to play the game and remain seated if they want to sing. Six stood, 11 remained seated, and Castano blended a lesson in math (“Which is bigger, 6 or 11?”), classroom democracy (“We’re going to decide by voting”) and how to handle not getting your way (most of the six who voted against the song ended up singing along, although one boy lay facedown on the ground in disappointment).

Soon the whole class was singing a song about the alphabet to the tune of “Who Let the Dogs Out?”

The Manatee County School District has run a similar program since 2015, but instead of relying on philanthropy, Manatee has funded the program through a combination of state and federal dollars. Children living in a Title I attendance zone in Manatee can attend all-day free VPK run by the district’s 15 Title I elementary schools. Manatee’s program mirrors the Gocio program in many ways — the children are taught by licensed teachers, eat lunch in the cafeteria and get acclimated to the general routine of a school day.

As the number of poor children in Manatee schools increased from 48 percent of the district population to 59 percent in the last 10 years, the district has seen a slow but steady increase in Title I funding, said Elena Garcia, Manatee’s director of federal programs. In 2015, former Manatee superintendent Diana Greene established the Title I pre-K program, pulling, in part, from those federal funds earmarked for serving children of poverty.

“We were one of the forerunners in the state for using Title I funds for early learning,” Garcia said.

Manatee also offsets the cost by participating in the state’s Voluntary Prekindergarten program, which provides state money to programs that meet certain criteria. At just over $13 per child per day, the state funding is not nearly enough to cover the true cost of an all-day program, and there are burdens in accepting state funding. All of the state’s VPK providers are judged by their children’s success on the Florida Kindergarten Readiness Screener, a test kindergarten students take in the fall. The test has been criticized as an unfair and inaccurate instrument by early-learning groups statewide, largely because children take it months after completing VPK and the test does not measure growth.

The state requires VPK providers to have at least 60 percent of their “alumni” pass the test, or else the provider can be placed on probation, and it can taint a program’s reputation. Last year 42 percent of the state’s VPK providers missed the minimum threshold on the kindergarten readiness screener, and in Manatee only one of the Title I schools hosting free all-day VPK met the minimum standard. Programs were held harmless for the results for the first two years of the test’s implementation, but when scores are released this fall, programs that do not meet the minimum threshold will face consequences.

Robin Thompson, Manatee’s director of early learning, said that despite the district’s struggles on the Kindergarten Readiness Screener, children attending Manatee’s VPK made great strides on the “VPK assessment,” a different state test that is administered three times during the VPK year in Manatee and is widely regarded as a more authentic reflection of academic progress than the Readiness Screener.

“That assessment shows tremendous growth in our VPK. It’s just where they come in is typically they need a little bit more instruction to get up to the kindergarten level,” Thompson said. “We see lots of growth with our students.”

Because Gocio’s program is not a state-funded VPK, the school misses out on state funding that would likely cover roughly a third of the cost of the program, but, unlike Manatee, it is not at risk of being placed on probation if students struggle on the controversial kindergarten readiness screener.

Expanding the program to all of Sarasota’s Title I schools once Gocio’s pilot concludes will require a serious investment by the Sarasota School Board or the state. If the cost stayed the same, expanding free pre-k to all 11 Title I schools would cost millions of dollars annually.

Sarasota School Board Chairwoman Jane Goodwin, a big fan of the program, said with state education funds spread thin, the board would need to find the money in reserves or make a local funding initiative request of the Legislature. She is hopeful that the results will speak for themselves. The data at this point is anecdotal, but in the spring the Department of Education is expected to release Kindergarten Readiness Scores, which will show how well Gocio’s first class of pre-K students did on their first state test.

“Once we get the data from these three years, we will run that up the flagpole,” Goodwin said. “We’ll say to (Commissioner of Education Richard) Corcoran, ‘Look what this does.’”

The Hensons have had success in creating pilot programs that eventually pick up funding from the state. In 2013 the couple provided funds to start a six-week Summer Learning Academy at Alta Vista Elementary School. The school district eventually expanded it to all Title I schools, and last year the Legislature gave the district $500,000 to fund the program.

“What the Legislature likes with us is when we go to them with a special program … we aren’t asking them for seed money to try something,” Goodwin said. “We’ve had philanthropy pay for something for three years and we are going to them with data. They can say, ‘You’re right, that’s working.’”