On August 3, 2020, the Suncoast Campaign for Grade-Level Reading (SCGLR) uploaded its 100th webisode of THIS BOOK IS COOL! (TBIC). Spanning ten weeks, each webisode featured a special guest who enthusiastically reviewed a meaningful book with host Beth Duda, director of SCGLR. To learn more about the background of this program, read this blog post by Beth. Thus, instead of diving into program details, this post takes a look back to celebrate THIS BOOK IS COOL!’s accomplishments, while also sharing how SCGLR plans to connect with children, parents, educators, afterschool providers, and possibilitarians passionate about education and reading in the future.

Every single person involved deserves a huge round of applause for her, his or their contribution.

Leading the charge was Duda. She not only managed TBIC but also committed her time to serve as the host for all 100 webisodes while overseeing the other moving parts of SCGLR.

How much time did that take? On average, the length of a webisode is between 10-15 minutes. For the sake of ease, let’s average that to 12.5 minutes. So, 12.5 minutes x 100 webisodes = 1,250 minutes. Divided by 60 (minutes in an hour), TBIC produced almost 21 hours of content. You could watch TBIC episodes straight for almost an entire day.

Or, consider a television series. If television episodes are 23 minutes long without commercials, that would be about 54 episodes, which is probably between 2-3 seasons of filming. That doesn’t include the time taken to reach out to potential guests, prepping them for the webisode, managing the set, and the countless hours of editing to make each webisode uniquely and thoughtfully engaging. (Check out Captain Awesome to the Rescue – you’ll see an example of just how unique and entertaining each webisode is!)

While a television series creates 2-3 seasons of filming in 2-3 years, TBIC created this new content in twelve weeks. Twelve weeks! Let that sink in. It was a ginormous undertaking. 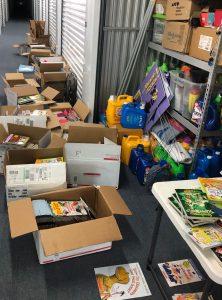 To further understand the vast amount of work put in to TBIC, I visited the SCGLR storage unit to help conduct inventory as the Summer Reading Challenge was winding down. As someone who did not contribute to the creation and delivery of TBIC, I was amazed at how, in the utmost caring way, the team created new content, contributed books to children and their families, and went out of their way to make sure children received these books.

Children’s (and parents’) reactions show how much they value reading.

All that being said, The Patterson Foundation (TPF) celebrates the work done but also remains committed to deepening connection and engagement. In other words, the work doesn’t stop. Yes, SCGLR created this wonderful program, but what next? How does it further connect with people, organizations, and communities? How does TPF share what it has learned from TBIC with others here, across the state, and nationally? What lessons and content can be pulled to further understanding and to help create new realities? SCGLR is thinking deeply about these questions and developing ways to further this work.

Stay tuned. With TBIC, the possibilities are endless, and I am thrilled to be part of the journey and the movement.