A Gift of Pure Love

I’ve been reflecting on my experiences when I had to do my laundry at the laundromat. I found the process quite tedious. You had to be there at the right time to find washers empty. At the time, I did not know that there was change available at the laundromat so, I would go around to neighboring stores to ask for change. Sometimes, I would forget to bring soap. I didn’t like the fact that I had to wait at the laundromat for hours to get my clothes washed, and I was annoyed by how expensive it was.

The families who attended the Pop-Up Neighbor Through Laundry Day, provided by the Suncoast Campaign for Grade-Level Reading, had a much different experience. The laundromat was filled with smiles, books, tenderness, activities, excitement, and love. As people walked in, not having any knowledge that they would get their laundry paid for that day, thanks to the generosity of The Patterson Foundation, they were delighted when they were told what was happening. It was as if this not-so-exciting routine activity had just become the highlight of their day. Their smiles were priceless.

It was a mix of surprise, happiness, and relief for the parents when they discovered the literacy activities for the children that were provided throughout the laundromat. Community organizations like UnidosNOW, All Faiths Food Bank, Sarasota Public Libraries, The Literacy Coalition of Sarasota County, and the Community Foundation of Sarasota County were there to provide information and resources for the families and even the Baltimore Orioles Bird Mascot made an appearance. Can you imagine being a baseball fan and while doing laundry, your favorite mascot appears and helps you fold your wash? That was the case for many of these community members. The children were especially excited by the party atmosphere. It seemed like everyone in the laundromat was happy, thankful, and together. It really felt like a neighborhood.

One offering that made an impact on me was the way the children were engaged with the celebrity readers. They were given attention while their parents were busy getting the machines ready for the wash, and the children were very responsive to the opportunity. There was no doubt reading books was fun for them, you could see it clearly on their faces as they smiled from ear to ear. Thanks to the Early Learning Coalition of Manatee County, the children had a wide selection of books to read, and each of them was able to pick a book to take home. There was a beautiful energy of kindness and generosity that became contagious to the point that the older children wanted to be part of the experience too, and they began reading to the younger ones. One of the girls became interested in watching the video that was being made of the event. She learned about cameras, filming, and then had the opportunity to record some of the interviews! 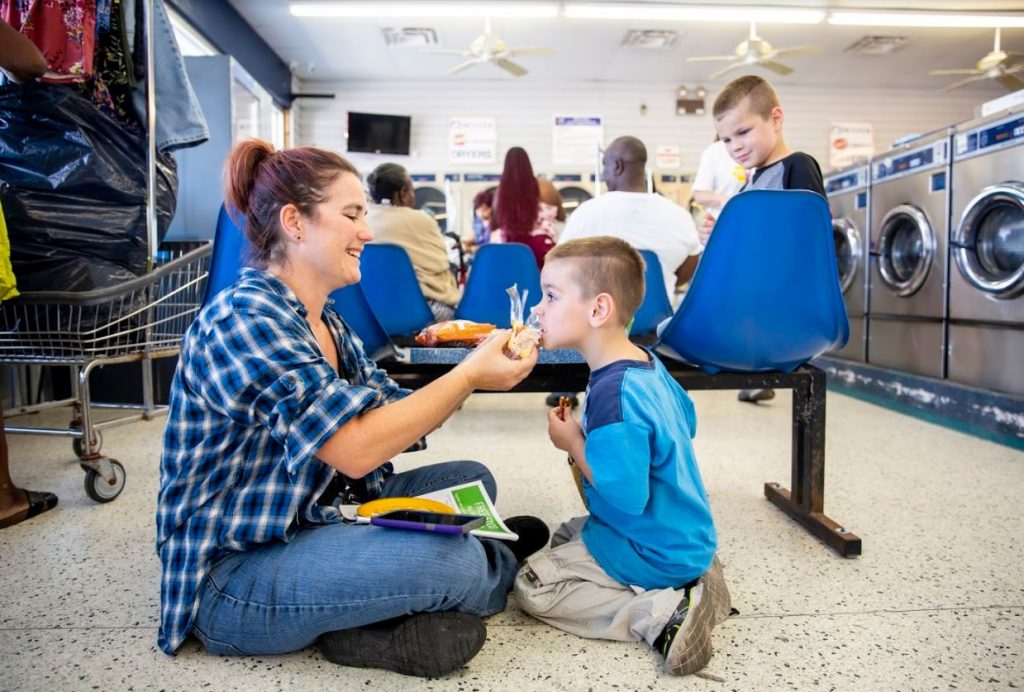 As I look over the photos that I took, there was one moment that I will never forget. As I was looking for great moments to photograph, I saw a mother as she gave bites of her sandwich to her younger son. The Patterson Foundation provided a buffet lunch for everyone, and there was a lot of excitement about that. While I took their photo, the mother smiled at her son, gracefully. I could see her appreciation of the opportunity to provide this food to him. I could see her love for her family, her struggle, and her resilience. She was definitely filled with joy as she waited for her laundry to finish.

Before this day, I had heard from others about the Pop-Up Neighbor Through Laundry Day. Community members said great things about it, especially how rewarding it was for everyone who experienced it. I found it to be even more than rewarding, it was a gift that appeared to be pure love. It defines the reason why many like to help. Being at the Pop-Up Neighbor through Laundry Day allowed me to witness first-hand the impact that a simple act of kindness can have on those who need it most. It’s priceless.